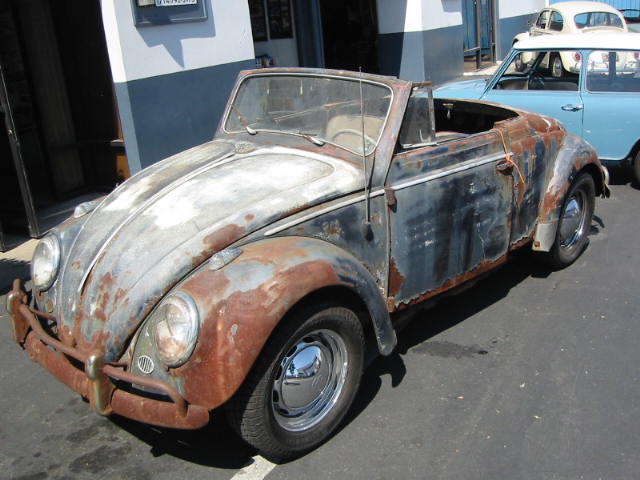 Ok...this one is ready for the show circuit...perfectly restored, drive it anywhere, best of show winner at any concours event
in the world guaranteed....
And then I woke up.

What this car has going for it though is some very extreme rarity and endless possibilities.
This is a 1955 Karmann Bodied Beetle Convertible that was modified by an unknown coachbuilding firm
some time early on it its life. The body style is very similar to the Hebmuller cars of the late 40's and early 50's.
The documents from Wolfsburg show production and delivery in 1955 to an
East Coast US port. From there it is a mystery. Prior to the documents from VW, I was nearly positive
that this was the sole surviving Meyer Coachbuilt from Austria, but if it were, the original destination port would probably have
been in Europe. And shortly after the VW documents were uncovered I finally got in contact with a surviving member of the
Meyer family who further disproved my first solid lead as all the Meyer cars were based upon hardtop Beetles
and this car was obviously a Cabriolet from the very beginning.

So now it's a mystery again and hopefully with further sleuthing the maker of the gourgeous custom body
will surface. What is quite obvious at this point is that there are no other examples of this special model known.
So what we have here is a true one-off, a one of a kind find.

UPDATE:
The car has now been identified!!
Dubbed, the Russo Roadster, after it's builder, a Mr Frank Russo of Pennsylvania.
He bought the car damaged but with low miles on it in the late 1950's and then patterned the body
off of an original Hebmuller that he had access to at the time.
He was obviously a craftsman of some regard as the work is quality even 50+ years later.


I'll go ahead and pitch in the term "Diamond in the rough" as it seems to fit. 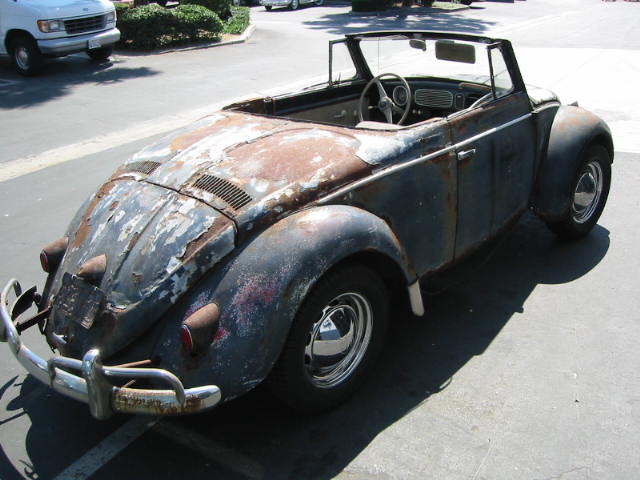 The body lines are very pretty and it is easy to squint your eyes a little and visualize just how gorgeous this car
would be once restored to it's former glory. 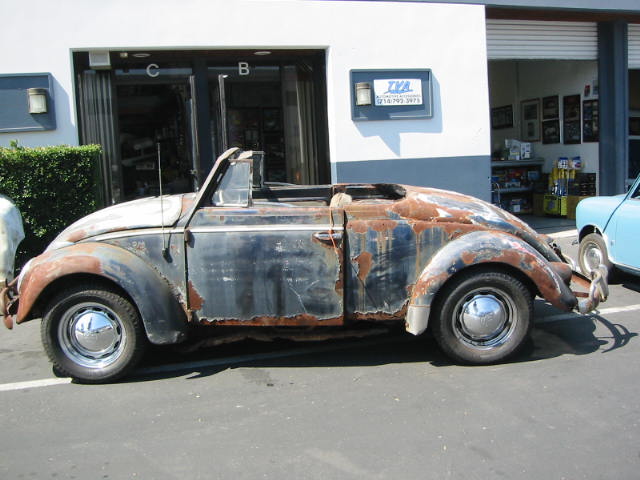 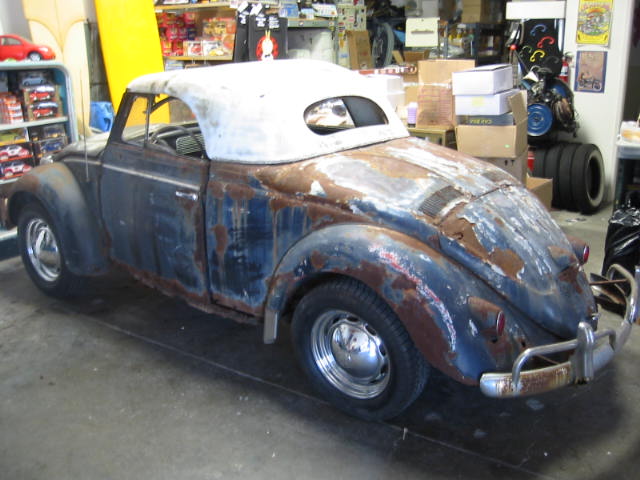 Here it is with the top in place.
The top is a removeable hardtop that has the appearance of a folding soft top.
It latches on with the original convertible top latches and houses the original 55 Convertible rear window glass. 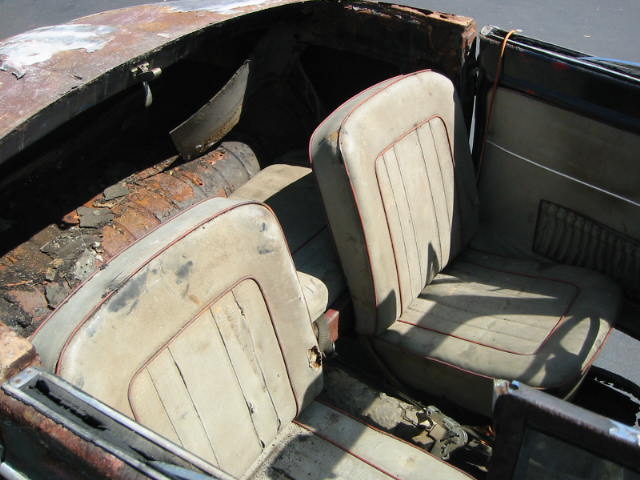 The interior is all original and intact...excellent for patterns for an accurate restoration. 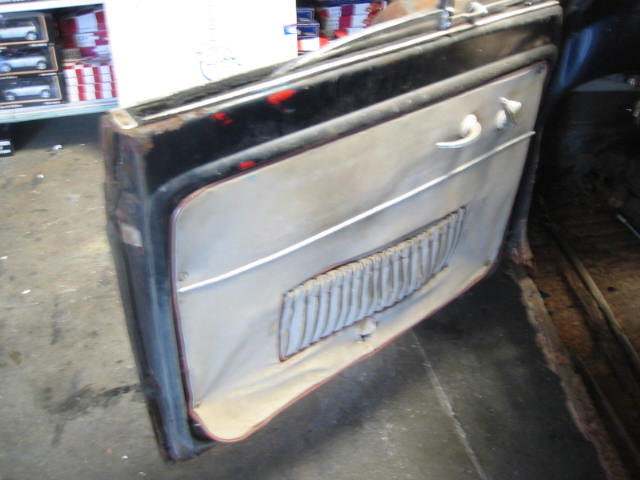 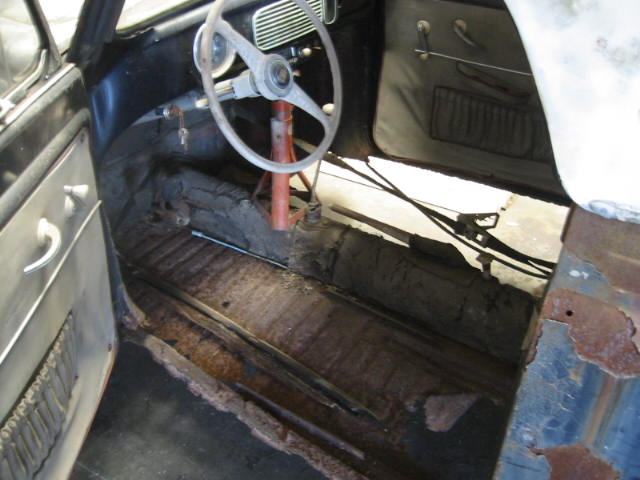 The biggest challenge with restoring this car is rust.
Unfortunately the car has been exposed to the elements for many many years and ol Mother Nature
has not been kind. The floor pans are all but gone, the support rails and heater channels are too,
And there is rust in the front apron area as well as in the body at some points.
I have aquired an excellent donor body for the support rails and lower flanks that is included with the sale. 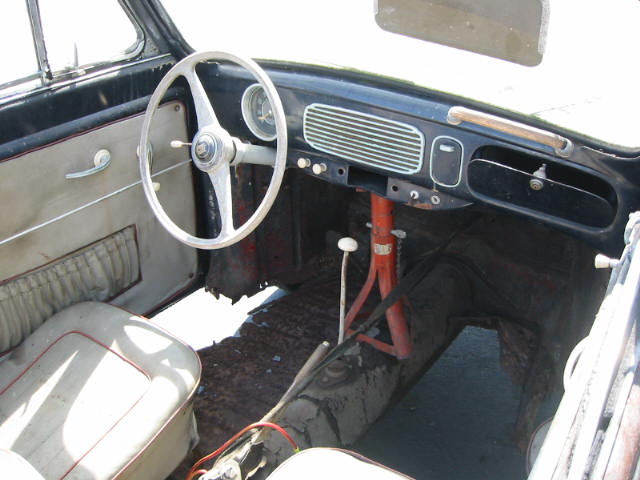 The dash is clean complete and uncut.
Since the support rails are gone, there is a temporary support under the dash to keep the body lined up.
The rare convertible only parts are all in place such as the rear view mirror, locking glove box, dash grab handle,
covered door hinges, small "mail slot" rear window, all the top latches, the locking hood release, and everything is there.
Some close inpection of the rear quarter panels even showed that the car was originally equipped with semaphore turn
signals behind the doors. It doesnt appear that the mechanisms are present but the mounting boxes are there. 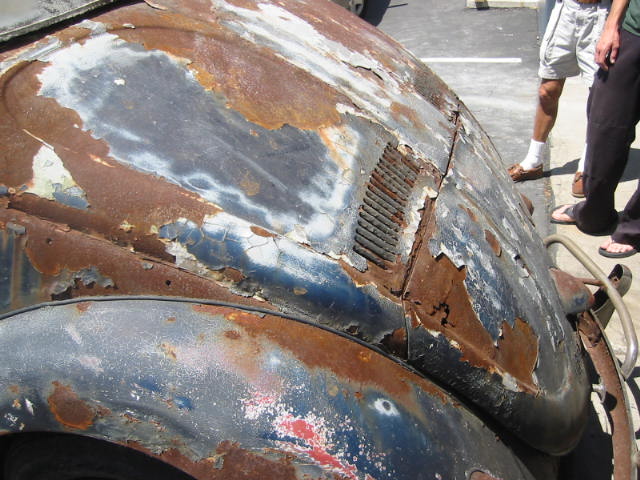 Here's a good detail shot of the rear deck modifications.
The air vents were the original ones from the convertible "W" decklid that were relocated
above the re-worked engine lid. It looks like portions of another hood were used
and a lot metal work and re-shaping to make it all fit. It really looks like it was done well.
I cant imagine it being a home job, but if it was the builder was a master at his craft.

Under the engine lid lies the original 36 horse engine, very complete but quite frozen in time.

Go ahead and squint again...picture it finished with the crowds of VW nuts ooohhhing and ahhing at it.
Ive been very tantilized by the car and I really want to restore it myself and make it happen.
Ive been eyeing it daily for the past two years and have done little to it except for flaking off an occassional chip of paint.
I figured I might as well just put it up for sale and see if there are any takers. Im not wildly motivated to sell it
but if the right buyer comes along I will be happy to see it go on and be restored by someone else.
I may kick myself in the end when I see it in some magazine or book in the future, but I will have
to live with the fact that "I owned it once". It truly has the potential to be extremely valueable as well as beautiful. 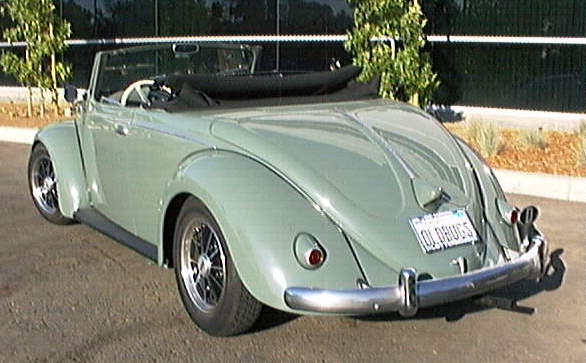 Just so you dont have to squint too hard...here is a photo of my other "Coachbuilt",
The Rosensteil Roadster, shining in the summer sun. (this one Im keeping ...dont ask!)

So...back to the task at hand.
Another thing I forgot to mention is that included in the sale is all of the original wheels
including caps and aluminum trim rings!! (The chrome wheels are just on the car so I can roll it around the shop)

In closing this is a very big project car...not to be taken lightly.
Its not a car you can hop in and drive and just respray to make it shiny.
It is welll withing the realm of possibility though and once it's completed
you will have perhaps one of the rarest VWs on the planet.

Just think about it...they made over 700 Hebmullers...and there is only ONE of these!!