The history of the Wrought Iron Beetle has always been clouded in mystery.
Not even the folks at VW seem to know the whole story.

I have researched these cars for a long time and have managed to acquire three of them myself over the years,
including one directly from the family of the original builder of them after his passing.
It is through this direct source that the truth has really come to light.

Rafael Esparza Prieto grew up in a blacksmith's shop in Mexico.  From a long family line of blacksmiths he learned the craft
from his elders first hand. As a child he would pump the bellows to keep the fire hot, he even earned the nickname
"Blackie" because he was always covered in soot from the forge.  At one point Rafael took a second job at a local
auto parts store  in Zacatecas and the owner of the shop Mr Montes asked him if he could build a wrought iron car to use as a sign for the business.
Always up for a challenge, he agreed and started crafting. Using an actual Beetle as a form,
he heat, hammered and formed the skeleton shape of a VW and then created swirls and patterns to fill in the empty spaces.
The finished product ended up on a rotating platform at the business and caught the eye of all the passers-by.

One day someone from the VW factory inquired about the creation and asked Rafael if he could build another one.
The Olympic Games in Mexico City were coming up in 1968 and VW hired him to build two for promotional use there.
As VW dignitaries came to town and saw the cars, they wanted one for themselves as well and as a result Rafael
got more orders to build the Iron Beetles. They quickly spread out to VW dealerships around the world.

They are also known in the VW circles as "The Wedding Car", as many of them have been used in weddings (I guess)

From what the family told me,  there were 20 of these cars built officially for Volkswagen.
There were also two examples Rafael built himself in later years when he emigrated to California.  Adding that to the original built for
Mr Montes in Zacatecas, that totals 23 that were done by Rafael.

Other metal artists around the world have built their own versions as well. 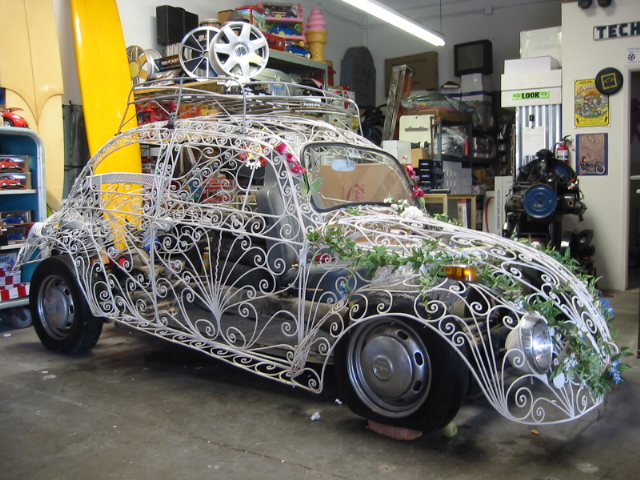 Here is our first genuine VW Iron Beetle.
This was purchased from an elderly Mexican man who found the body of the car back in the 1970's
abandoned just outside of Puerto Vallarta Mexico.

He and his brother managed to drag the body back home and then started to search for it's most recent owner.
They tracked it down to a local doctor, who had owned it for several years and had apparently bought it from someone
who had said that it was one of the two original cars displayed at the 1968 Olympics.
The car had been stripped of it's drive train and chassis, but was still in fine shape. 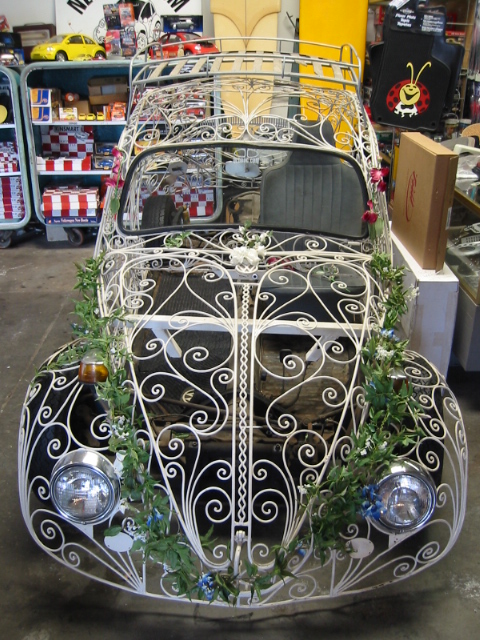 Several years later when the man moved to California, he lashed the body to the top of his motor home
for the drive. Once re-located in California, he set out to make the car run and drive again.
He fitted the body to a cut down Super Beetle chassis and drove it around a little.
He called it "Cinderella" and the car obviously meant the world to him.
We came to be the next owners after seeing the car listed up for auction on Ebay.
I picked the car up from the man personally and he told me the car's story.
He was truly near the end of his life when I met him, and I am sure that he has now gone on to greener pastures.
I promised him that Cinderella would get a fine home and I towed it back to our shop in Brea.

Once here, we carefully removed the body from the incorrect chassis and located a proper 68 model chassis and drive train.
The car spent some time on display in our showroom and was eventually sold on to another collector in Ventura California. 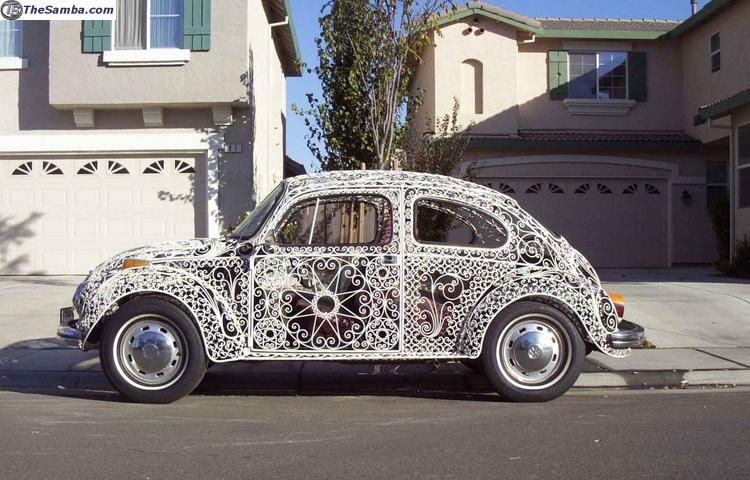 The second wrought iron Beetle to come into our hands was built by Raphael after he came to California.
It was built for a friend of his in Santa Barbara that owned the local Mexican food restaurant.


One completed the car was parked out front of "Casa Linda" for many years and became a bit of a roadside icon
to people of the area.  We acquired it in 2004 and enjoyed it for quite a while. This car is now in the Taj Ma Garaj collection in Ohio.

In 2013 I was contacted by a relative of Rafael to told me the news that he had passed away.
Apparently in his later years he decided to build another iron Beetle but sadly passed before it was completed.
They had found my information through the web and wondered if I would be interested in taking on the project.

Here I am with Rafael's wife and the final iron Beetle.

The metal work was about 3/4 finished and certainly beyond my skill set to complete
but fortunately my eldest brother Royce was up for the challenge. He took it on and
really knocked it out of the park. It came out spectacular.

The finished product is now a part of the Langan collection and is on display at Gene Langan VW in Connecticut. 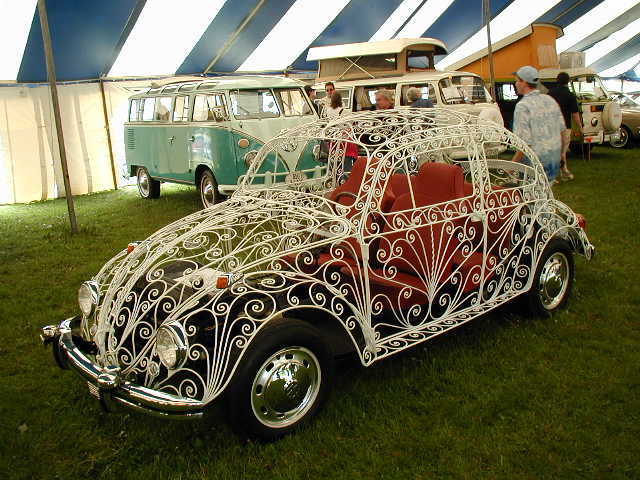 This example is a part of the VW of America Collection in Michigan
It has been displayed at shows and museums across the country over the years
including recently at the Amelia Island Concours in Florida.

We are trying to document as many of the others that remain in existence
and will add photos to this page as I find them.